When my new camera had come home I wanted to shoot some glamorous dish and I was hunting on net for a fancy dish. Ravioli was the beauty I decided to conduct my first photo shoot with. It had come well that I tried it again for the local cookery contest in Little Millennium School in our locality. You know what, it won the first prize and was critically acclaimed ;)… I made a twist to the traditional recipe for accommodating it to the contest theme; I used only wheat flour to make raviolis while traditionally semolina flour is used for the recipe. 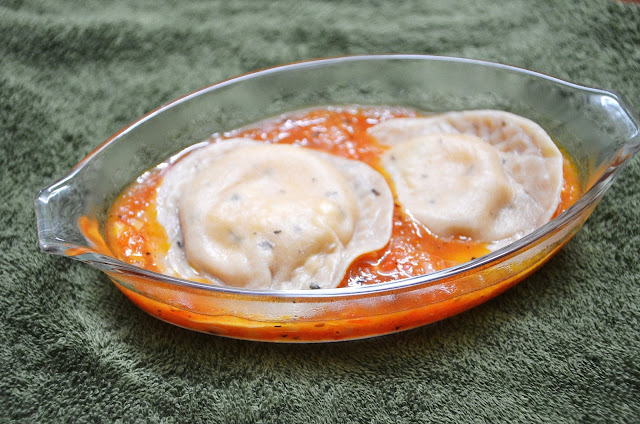 Serves: 5
Preparation Time: 30 minutes
Cooking Time: 40 minutes
Ingredients:
1.      Wheat flour – 2 cups
2.    Dried basil – ¼ tsp
3.    Olive oil – 4 tbsp
4.    Salt to taste
5.     Ricotta cheese – 50 gm (I used cottage cheese)
6.    Parmesan cheese – 50 gm (I used cheddar cheese)
7.     White pepper crushed – ¼ tsp
8.    Tomato well ripen – 10
9.    Onion big – 1, finely chopped.
10. Garlic – ½ a pod, peeled and grated.
11.  Dried Italian herbs – ½ tsp
12.Pepper crushed – 1 tsp
Method:
Step 1: Knead soft dough with wheat flour, 2 tbsp olive oil, salt as per taste, dried basil with luke warm water. Set it aside for a couple of hours.
Step 2: Prepare the filling by blending together both the cheeses with white pepper. It should be in a cream cheese consistency; I added little milk.
Step 3: Drop the tomatoes in boiling water and peel off the skin. Crush them in a blender pulsing few times.
Step 4: Heat 2 tbsp of olive oil sauté garlic and onion in it and add the crushed tomato to it. Simmer it until a nice sauce is obtained. Sprinkle salt, crushed pepper and Italian herbs to it and mix well. Adjust taste and turn off heat. This might take 30 min approximately and you can prepare raviolis in parallel.
Step 5: On a wide working surface, soften the dough and divide into 4 portions. Roll them into long rectangle like sheets and cut each into 2” ribbons
Step 6: Now place blobs of filling on one ribbon leaving 2” gap in between. With the help of brush or your fingers, wet the rest of the surface of ribbon in which filling is placed with plain water.
Step 7: Carefully cover it with another ribbon from one side to the other by pressing your finger in between each filling so as to allow enough covering for the bulges.
Step 8: Once the entire ribbon is covered work to get the sheets stick to each other while not allowing any air bubble to stay in with the filling. Now cut the between fillings to get fresh raviolis. Alternatively you can use cookie cutter to get various shapes but it is meticulous relatively. Freeze them until use. 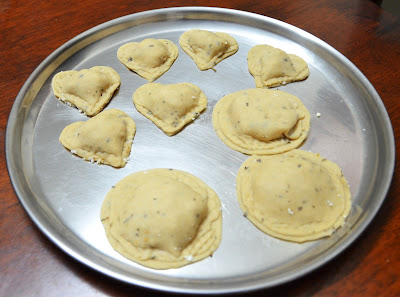 Step 9: To cook the raviolis, boil salt water in a vessel and blanch the raviolis until they float on the surface. When done, carefully drain all water and collect them. Repeat other batches. 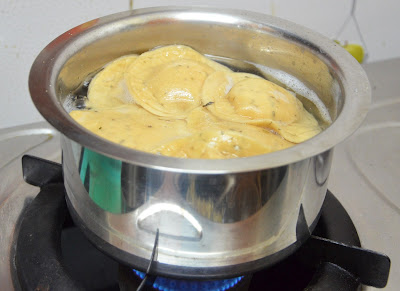 Step 10: Serving is done as per comfort, look appeal and taste. Drop the raviolis into sauce and mix well and serve on a plate; or spoon enormous sauce in a shallow bowl and arrange raviolis on top; or arrange raviolis and pour some sauce over like our idli – sambar 😉 (The photographer in me is yet to mature, bear with me) 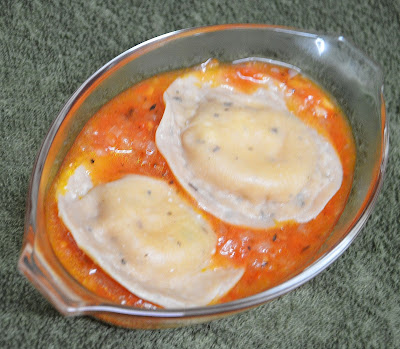