One can even claim pani poori to be the king of chaats as they are both, the mostly preferred chaat and the most people’s prefered chaat. It is known by various names across India such as gol gappas or gupchup or puchka. I don’t think there are people in India who are non-addictive to gol gappas. One of my friends used to say that she wishes to get married to a panipuriwala so that she gets panipuri fed anytime she wants to. Most of the hygiene observers and calories calculators consider panipuri an exception for its exceptional experience. Kids to old age people cheer up on the explosion of spices inside the mouth after gulping those small crisp, spice filled puris. 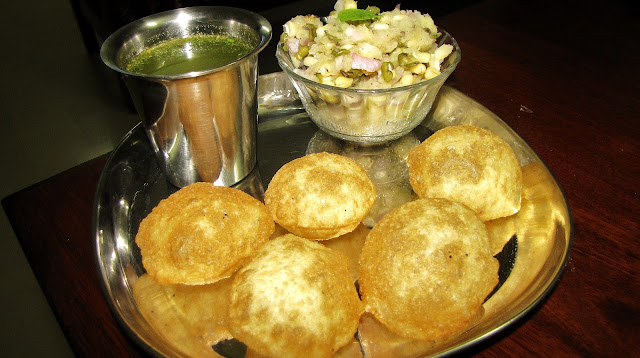 Step 1: For pani, grind the greenchilies, mint leaves, coriander leaves and juice of a lemon in a mixer and dissolve it in 1 lt of water along with other dry ingredients. Either chill this or add ice cubes.
Step 2: For masala, mash the potatoes, add onion, moong sprouts, coriander leaves, chaat masala, and chili powder and mix them well.
Step 3: Now for dressing the little puris, break open the softer side of the puri, stuff a little masala in it and garnish with fine sev. Repeat for all the puris.
Step 4: While serving, dip the dressed puris inside the pani and eat whole. Believe me, nothing on earth is so heavenly.